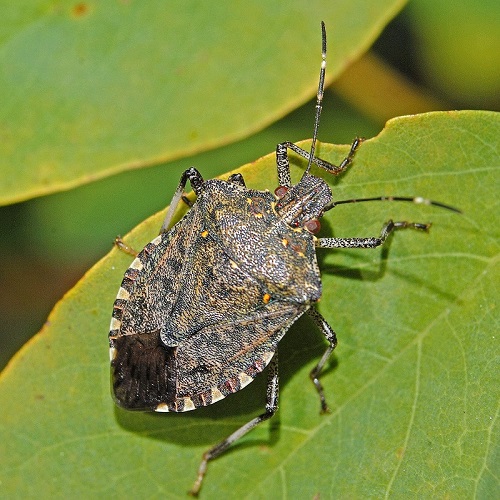 Stink bugs were brought to the United States from Eastern Asia in the mid-1990s; the brown marmorated stink bug (BMSB) is classified as an invasive species or a pest of foreign origin. It is also known as the yellow-brown stink insect or the East Asian stink insect. The insect was discovered in the United States in 1996 in Allentown, Pennsylvania, but it was not recognized or named until September 2001. It soon moved east to New Jersey, then to Virginia by 2004, and is presently spreading south to the North Carolina border.

Brown marmorated stink bugs are now most common in the mid-Atlanta area, though they have been found in 44 states and the District of Columbia. The insect is native to China, Japan, Korea, and Taiwan.

These bugs are described in a variety of ways. They are classified as “big, oval-shaped insects” as well as “shield-shaped insects.” Adult stink bugs can grow to be nearly 2 cm long. They are almost as long as they are wide. Because their legs extend from the sides, mature bugs look much bigger. The brown marmorated stink bug is a kind of stink insect that is brownish. It has brighter and darker stripes on its antennae and wings.

Also read this: Covid-19 and immunity: When is an antibody test required?

What causes stink bugs to appear?

These bugs are Asian natives that were mistakenly imported to the United States in the late 1990s. Because stink bugs have no natural predators in the United States, they have increased swiftly and become a severe agricultural problem.

These bugs aren’t known to attack people or cause property damage, but they should be handled with care to prevent releasing their terrible stench. Their propensity to infiltrate houses in large numbers may be extremely bothersome. Even though they do not constitute a direct hazard to humans, these bugs ruin crops and constitute a hazard to the agricultural business.

How to get rid of stink bugs?

Stink bugs, well-known for their “smelly” reputation, typically infiltrate houses during the cooler months in search of a warm spot to overwinter. While stink bugs do not endanger homeowners’ health or property, they can rapidly become an odoriferous nuisance around the house.

Like other pests such as ants and termites, stink bugs can infiltrate structures in high numbers, making stink bugs challenging pests to control once inside. As a result, homeowners frequently seek easy solutions to keep these intruders at bay before an infestation starts.

As the weather drops and people begin to prepare for the winter months, consider pest-proofing the home, both inside and out, to keep these bugs and other pests from becoming unpleasant houseguests this autumn. If you’re wondering how to get rid of stink bugs, you can easily get rid of stink bugs by following these tips.

Block off all entrance points.

Spend some time evaluating the outside of your home for simple entrance spots for these bugs for appropriate stink bug management. Pay special attention to locations around siding and utility pipes, behind chimneys, and underneath wood fascia or other openings. Use a good grade silicone or silicone-latex caulk to seal any cracks and holes that are discovered.

Because these bugs may enter the home through the slightest gaps, it’s critical to repair or replace broken screens on windows or doors. Don’t forget to look for ripped weatherstripping and loose masonry. If necessary, door sweeps can be installed.

Switch off the lights.

Because these bugs are drawn to lights, it is best to keep outside illumination to a minimum. Turn off porch lights and close window curtains in the evenings to prevent light from pouring outside.

To avoid harborage sites, properly ventilate basements, attics, garages, and crawl spaces. In these cases, consider utilizing a dehumidifier. Install screens over your chimney and attic vents as well.

Before bringing items indoors, such as boxes containing holiday decorations and grocery bags, inspect them. Stink bugs can travel on these things and settle in once inside the house.

Another way to get rid of stink bugs is to cut off their food supply. Food should be stored in airtight containers, and rubbish should be disposed of in sealed containers regularly. Also, be sure to clean off countertops and sweep floors to remove crumbs and spill residue.

The life cycle of Stink bugs

The life cycle of a stink bug is comprised of several many growth stages. Many other insects, including bed bugs, cockroaches, termites, and lice, have a life cycle similar to that of the stink bug. While being an agricultural nuisance, these bugs do not feed on humans or cause property damage to dwellings at any stage of their existence.

Each year, up to three generations of these bugs are generated, and it all begins with a little summer love. From May through August, when these bugs mate, passion is in the air. Following mating, the female lays batches of 20 to 30 eggs on the underside of plant leaves. Her eggs resemble little barrels and are light green to blend in with their environment and escape predators. The eggs hatch in four to five days, kicking off the nymph stage.

Young stink bugs are known as nymphs after hatching. Nymphs go through five developmental phases known as instars. Because a nymph’s exoskeleton cannot expand with the young insect, each of these phases is effectively a growth spurt. Instead, to develop in size, nymphs must lose their constrictive outer layer of skin. Molting is the term used by entomologists to describe this process.

Each instar lasts around one week. The nymphs are roughly 2.4 millimeters long, wingless, and orange-red during the first instar. In the second, the nymphs darken and take on a remarkably close color to that of adults.

These bugs spend their adult life munching on plant materials, mating, and hunting for warm places to shelter from the winter cold. Humans frequently come into contact with these insects while they are looking for a comfortable winter shelter. these bugs will crawl through any possible crack or crevice to enter your warm home and reside there until spring arrives or an angry human kills them. Adult insects may marry within two weeks after reaching adulthood and survive for 50 days to eight months, depending on which of the 5,000 stink bug species they belong to.

So, It was the maximum info about these bugs which we bring for you. So, if you are looking for the exterminator, then you need pest control services and for this we will recommend you to contact with Vanquish Pest Control in Brampton.