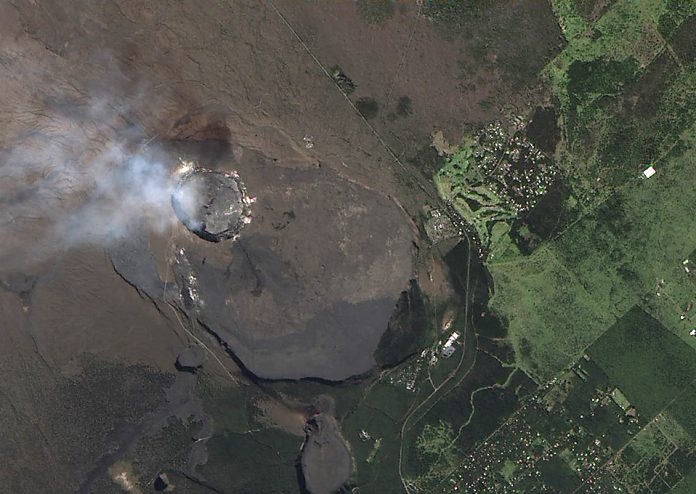 How Are Cameras Used to Monitor Volcanoes?

Are you worried about the subsequent supervolcano explosion? Cameras on satellites can calm your nerves! In this article, we will look at how cameras and remote sensing satellites are conducting volcano monitoring.

What Is Volcano Satellite Monitoring?

Volcano satellite monitoring refers to studying volcanoes using satellites. Volcanoes can cause trillions of dollars worth of damage or destroy entire countries. A supervolcano that NASA predicts erupts every 100,000 years could result in worldwide hunger and threaten our existence! Thanks to the help of satellite cameras, scientists can keep an eye on volcanoes that are showing signs of activity. Scientists can also use satellites to study the impact of volcanic eruptions. Satellites can monitor changes in the ground, destroyed areas, and gasses and dust in the atmosphere.

We are currently in the early stages of spacecraft monitoring, and even though there are now thousands of satellites orbiting the Earth and taking constant images, we still don’t know much about the volcano processes within the Earth. As satellite monitoring becomes more advanced, scientists hope to increase the accuracy of their predictions and prevent the loss of life and property from volcanic eruptions.

How Do Scientists Monitor Volcanoes?

Scientists use a variety of different methods to study volcanoes. The most common volcano monitoring techniques include seismographs to detect earthquakes that always precede volcanoes, shifts in the ground around the site which happens when magma is moving in the volcano’s chamber, shifts in volcanic gas emissions, and even changes in gravity. Scientists use ground sensors placed next to the volcanoes and can also monitor volcanic activity with satellites. Currently, ground sensors provide more accurate and detailed data. However, in the future, scientists hope that spacecrafts will produce far more extensive data than ground sensors.

Currently, scientists are conducting basic satellite monitoring, which includes looking at shifts in the ground formation surrounding volcanoes and studying the change in temperature in the vicinity of the volcano. If they have identified volcanoes showing these early eruption warning signs, they then place ground sensors at the volcano site for more in-depth data.

Can Volcanic Activity Be Predicted?

Currently, volcanic activity cannot be predicted by satellites. However, cameras on satellites can identify which volcanoes are showing activity and should be further inspected. Satellites can detect changes in temperature around the site and changes in ground formation, which are predictors of eruptions.

The current most effective method of predicting volcanic activity is to place land-based sensors on volcanoes that scientists think are the most active and study the data in hopes of finding warning signs. Sensing remote volcanoes is expensive and time-consuming, so using satellites to inspect them first is very cost-effective. However, placing ground sensors on volcanoes is not very accurate, and scientists have no reliable way of predicting the next big volcanic eruption. For example, when the massive Hunga Tonga-Hunga Ha’apai eruption occurred in 2022, scientists had barely been monitoring the site. The problem is scientists know very little about the processes that are occurring in the Earth, resulting in inaccurate predictions.

While remote sensing satellites can’t predict the next volcanic eruption, they are an invaluable tool for surveying the after-effects of an eruption. Volcanic satellite monitoring can reveal detailed information such as shifts in ground height, destroyed buildings, areas buried by lava, the height of the volcanic cloud, and the amount of ash. This information is incredibly helpful when preparing for the next big eruption. Satellite sensors can also highlight the volcanic activity effect on climate following an eruption by measuring the gas and dust particles thrust into the atmosphere. These particles typically have a cooling effect on the Earth as they block the Sun’s rays.

Unfortunately, satellite monitoring can’t predict the next big eruption. However, it can show warning signs such as shifts in temperature around the volcano and movement in the ground formation. Satellite monitoring is also highly effective at surveying the aftermath of an eruption, such as gas and dust particles in the atmosphere, lava coverage, and area destruction. Comment below on what volcano you think will explode next!