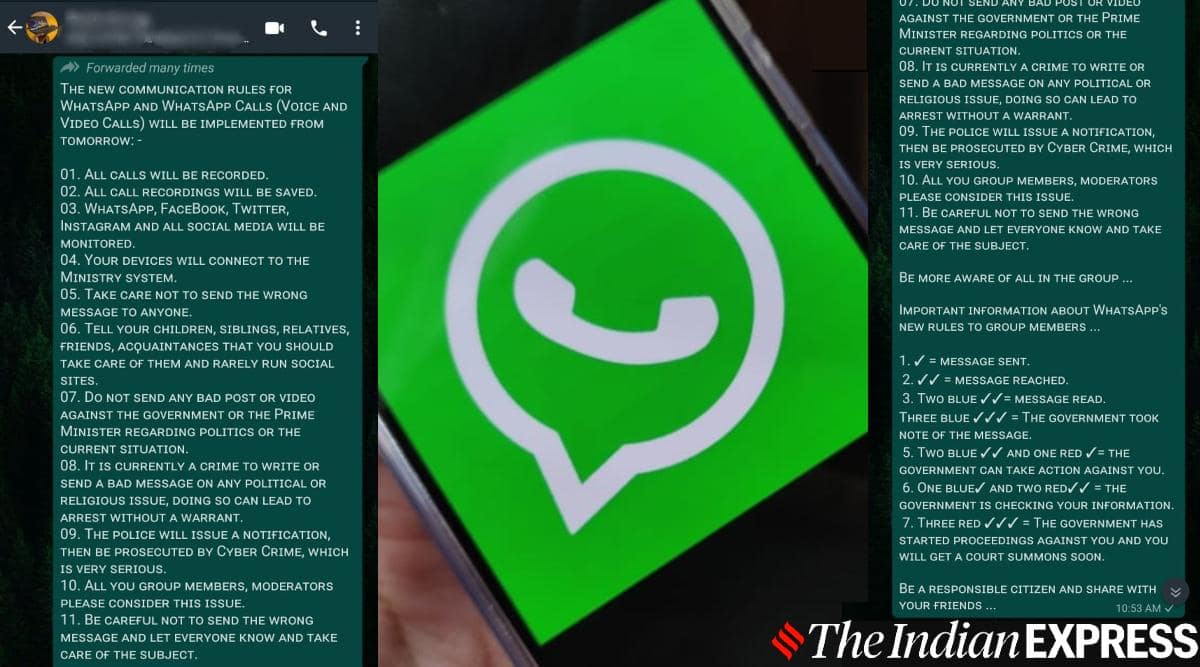 “Two blue ticks, and one red tick means the government can take action against, while three red ticks will mean that the government has started court proceedings against you.” This is what a new message claims on WhatsApp, though it should be noted that all of the claims made in this viral message are fake. A similar three red ticks message had gone viral last year, and was debunked last year as well.

The message claims WhatsApp has introduced new communication rules and is being shared at a time when the Facebook-owned app has gone to court over the government of India’s new IT rules, which include a traceability clause. While the traceability rules are being challenged, users should note that WhatsApp remains private and end-to-end encrypted meaning no third-party, be it Facebook or WhatsApp or even the government can read your messages.

The viral message, which has the ‘forwarded many times label’ says once the new rules are implemented, all calls will be recorded and social media accounts will also be monitored. It says if a user shares a negative message against the government or on a religious issue, then you will get arrested. Again, all of the claims made are fake and users should not forward this message.

The fake message even claims that your devices will get “connected to the ministry system.” The viral message also asserts that the Facebook-owned company has implemented a new tick system, allowing users to find out if the messages they are sending are being checked by the government.

Just recently, a fake message was circulated on WhatsApp, saying there is a new rule which allows WhatsApp, Facebook, and Instagram to use your images, messages, files, and other information for their personal gain. All these messages are fake and WhatsApp users are advised to not forward them to everyone.

The messaging app is end-to-end encrypted, so only the sender and the receiver can access any message they have exchanged. All your chats, photos, videos, voice messages, documents, status updates and calls can’t be accessed by WhatsApp, Facebook, or the government. Only you or the person you are communicating with can check chats.

End-to-end encryption means that your messages are secured with a lock, and only the recipient and you have the special key needed to unlock and read them. You can verify if the messages and calls are end-to-end encrypted by visiting the profile of an individual.

You then need to tap on “Encryption.” Here, you can scan the code or compare the 60-digit numbers with the recipient. If the result is similar, then it means your messages are secured.

The codes that you get are unique to each chat and can be compared between people in each chat. In case you get a “security code changed” notification on WhatsApp, then it means that your contact reinstalled WhatsApp or changed phones.