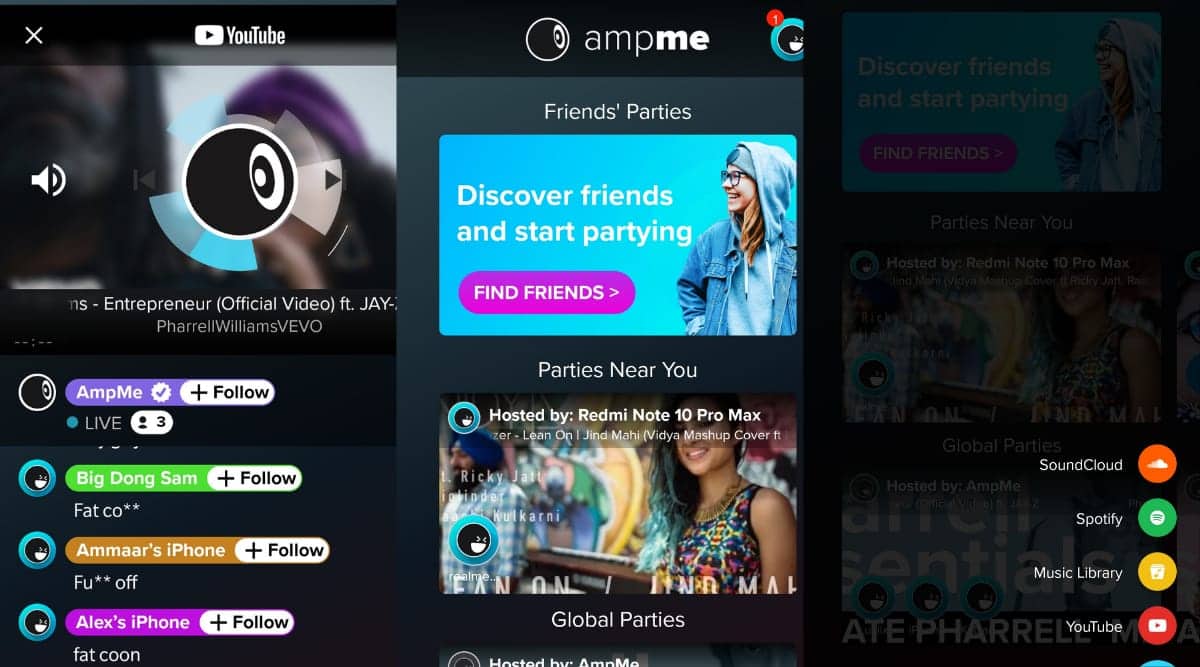 Buying and setting up a new surround sound system can be expensive and tedious, to say the least. If you are one of those people who has multiple speakers lying around and wondered if there was a way of connecting all the speakers to play the same sound at once, we have found just the app for you.

Android does not natively let you sync different Bluetooth speakers at once, though certain manufacturers such as Samsung have provided an added feature on some smartphones to achieve this. But what if you wanted to connect many more speakers to get a surround sound experience. AmpMe is an app that lets you synchronize multiple smartphones together to play the same song or video at once using the internet or hotspot.

AmpMe can be easily downloaded for free on Android and iOS devices albeit in-app purchases. After successfully installing the application on your device, users can host a party by clicking on the + button on the right-hand side of the neatly drawn-out interface. Users can also join parties hosted by others.

There are two ways you can use AmpMe depending on what you are interested in. AmpMe can be used to create a cohesive sound experience by using multiple smartphones and speakers and also to discover and share your music with the world. AmpMe allows you to host a party by selecting the song you wish to play from various platforms including YouTube, Spotify, Deezer, SoundCloud, and your personal Music Library. It is important to note here, that if you wish to play a song from Spotify, it is mandatory for you to have a Spotify Premium account.

AmpMe is essentially a social app which means you can join parties from around the world and listen to what others are listening to. The app also allows you to chat with other people after joining the party. This is a good way to discover new regional music. The app also supports video, so everyone can join the party and watch the same YouTube video that you are watching and vice versa.

After selecting the song/ video you wish to play, other users can join the party hosted by you, which syncs the devices to play the same song at once. This is especially useful if the other devices are nearby, to create a surround sound experience. Users can connect each device to wired speakers by using the headphone jack and can also connect the devices to Bluetooth speakers. The Bluetooth feature is in Beta Stage.

AmpMe has built on the idea of offering music synchronization across various devices, a feature that is sure to please a lot of users. The app is not only meant for people who want to share what they are listening to, with their friends and with the globe at large but also to create a surround sound system. Though various other apps like SoundSeeder and Chorus offer similar features, the easy-to-use, neat and simple interface of AmpMe is what I liked most.

The implementation of the features though is something sort of a mixed bag. In my testing using two smartphones, the app played the songs in sync most of the time. Though I did encounter some lag when playing songs, changing the song or replaying it fixed the issue.

One issue which I noticed in my primary testing of the app, was regarding the Bluetooth support. When I tried playing the song using two different devices both connected to two different Bluetooth speakers, the song was off sync repeatedly. Though you can fix the issue by using the manual sync option in each of the devices separately, it is a time-consuming process to do the same for each song.

One thing to note here is that I used a Boat Stone 1500 which comes with Bluetooth 4.2 and a Bose SoundLink Color which comes with a much older Bluetooth version. This could be one of the reasons for the devices being off-sync repeatedly.

When I tested the device with two Bluetooth 4.2 speakers the output was much better, though I still faced the occasional lag. Nevertheless, the clean interface and the ability to use your old Bluetooth/wired speakers to create a cohesive surround sound system are appealing.