Starting today, Twitter will re-open its verification process for users and add a separate application form for the same in the Account Settings tab. This will allow any user to apply directly for verification in order to get the coveted blue tick on the platform. Twitter is hoping this change will address the perception that the verification process is not transparent.

The social network also plans to introduce new account types such as automated accounts in the coming few months. It is also exploring memorial accounts for users who might have passed away. It will also be making additions to the About page of a user profile with the addition of features such as a ‘Pronouns,’ tab. However, these changes are still in works and there’s no exact timeline on when Twitter will roll them out.

An account still has to be ‘notable, authentic and active’ to get verified. Users can apply once every 30 days, and there will be no limit on the number of applications. So one can keep re-applying even if they get rejected.

Twitter says it will have a dedicated team working to approve the applications, and it will be done manually, though parts of the process will be automated.

But while anyone can apply to get verified on the platform now, Twitter will be approving only those who belong to six predefined categories. Notable accounts will need to be in the following categories: government, Companies, brands and organisations, news organisations and journalists, Entertainment, Sports and gaming and Activists, organisers, and other influential individuals.

Twitter plans to add two more categories to the list: scientists and religious leaders, though this will take place later on. Academics will be included along with scientists.

“We knew that there had to be a better, more consistent criteria that helps define what accounts, or people should be verified. But over recent years we weren’t very transparent or consistent about who we were verifying, and we heard from people that this process was arbitrary or confusing,” Sarah Husain, Product Policy lead for Verification said in a select media briefing ahead of the announcement.

She also said Twitter was committed to “evolving the policy” and improving it over time to ensure it “encompasses all of the notable accounts on Twitter that people are going to be looking for.”

When asked if follower count would make it easier to get the blue tick, Husain said, it will only serve as one of the indicators, and users will still need to meet the other criteria set by the platform. She added that follower count alone will never be the only reason why anyone gets verified or not verified.

Asked why Twitter was not relying on using just government issued to verify users, B Byrne, product manager for identity and profiles on Twitter said there were some challenges with that approach. “Government issued IDs are particularly tricky, globally, and have a strong bias towards people who are more affluent, who are in more developed countries, and have a higher status. It leaves out a lot of people such as refugees, women in countries, where access to ID is harder for women. And it’s also just much harder to do for a lot of developing nations,” Byrne said during the same briefing.

However, users will be asked to submit government IDs as well when applying for verification, but the lack of one won’t necessarily result in the verification application being rejected.

On whether those who are already verified would have to apply again, Twitter said those who were verified need not worry. However, those with verified accounts, but which are inactive will likely lose the blue tick.

On whether Twitter plans to withdraw badges for a user who leaves an organisation due to which they got the tick in the first place, the executives said it would really depend on a case by case basis. But changing the handle name will mean losing the verification badge, though users can change the display name. 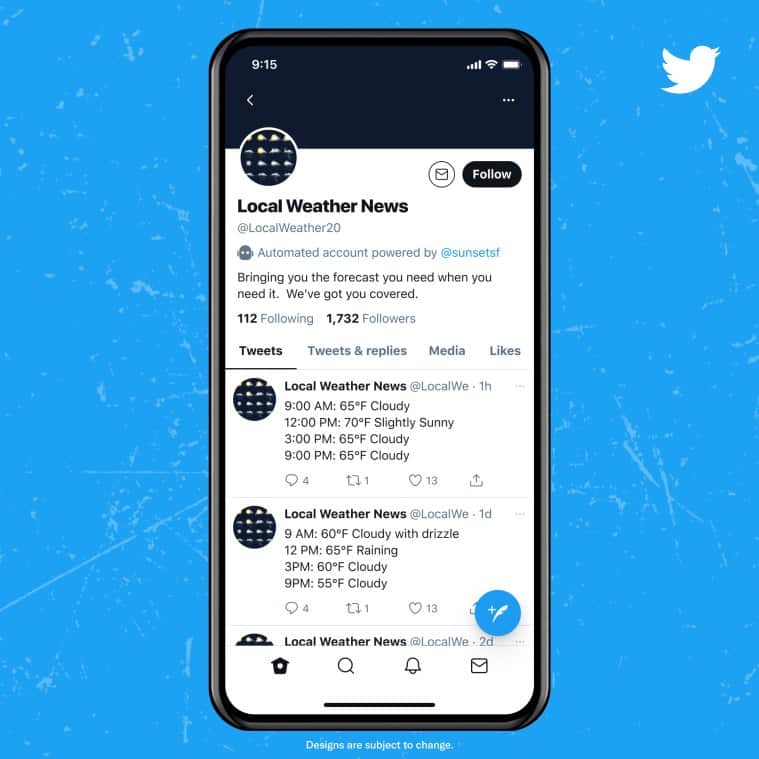 Automated accounts or bots will be coming to Twitter as well.

Automated accounts or bots will be coming to Twitter as well. However, the account users will have to specify at the time of setting up the account that it is a bot or automated account. Twitter will not be verifying or adding the label on its own.
“Automated accounts, also known as bots, get a bad reputation, but not all of them are bad. A lot of them are actually really helpful and creative, like the ones that are helping people find vaccine appointments or warning of seismic activity in a high risk, earthquake region,” Byrne said, explaining why this support was being added.

Twitter hopes it can help legitimise these bots and set them apart from the nefarious bots. The owner will be able to define the bot’s purpose, when setting up the account. Byrne also said that while memorial accounts are next on the list, humour and satire accounts are being considered as well.