Snap Inc, the parent company of Snapchat, has showcased its next-generation Spectacles, its first pair of goggles which bring Augmented Reality (AR) to life. However, Snap isn’t selling these AR-ready Spectacles just yet; it is only offering them to select creators. The company made the announcement at its annual Snap Partner Summit.

Snap also announced Connected Lenses, a sort of filter that allows two users to have a shared AR experience from their phones. It is partnering with Lego to create a Connected Lens.

The Spectacles will bring AR experience to life and will be capable of adding the right elements and filters based on where the user is present. During the presentation, Snap CEO Evan Spiegel showed how the spectacles can be used to pull up various kinds of lenses, similar to how it works on Snapchat and these filters then get applied to realworld surroundings. For example, one lense showed an AR dog in the frame and Spiegel then threw an AR bone for the dog to fetch.

The AR view in Snap’s new Spectacles, which are not yet for sale.

“Our first pair of glasses that bring augmented reality to life with dual 3d waveguide displays, and a 26.3 degrees diagonal field of view, immersive lens experiences, feel like they are naturally overlaid on the world in front of you. You can view these experiences, whether you are indoors or outside, and the display dynamically adjusts by shining up to 2000 nits of brightness so Lenses always appear with full image quality,” Spiegel said during the presentation.

The spectacles have two RGB cameras, four built-in microphones, two stereo speakers and built-in touchpad controls as well. The front-facing cameras can help the glasses detect objects and surfaces you are looking to showcase the best lense possible. Users can even control these using voice commands.

Spiegel also said the new Spectacles can fully integrate with Lens Studio, the company’s own desktop application for developers to build 3D and AR Lenses. Snap says lense creators will be able to “wirelessly push their lenses to Spectacles directly for rapid testing and iteration,” and build these in real-time. 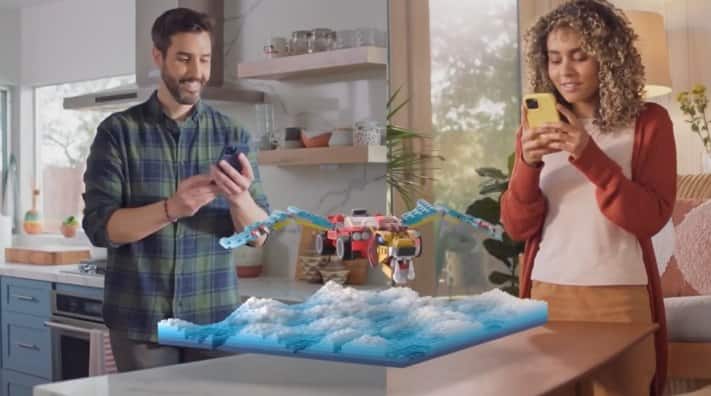 The Connected Lenses feature with Lego, which is coming to Snapchat.

Connected Lenses lets users have a shared lense experience with friends anywhere. The first Connect Lense will let two or more users come together and build a Lego kit in AR mode. The ability to create these Lenses will be added to the company’s Lens Studio tool.

“Any developer in the world can actually start creating the experiences. We have an initial experience launching with Lego today, but after that anyone can create these experiences,” Qi Pan, Director for Computer Vision Engineering at Snap told indianexpress.com over a call, adding that they are making the AR experience a shared one.

Pan explained how the Lego experience works: “I will be building the Lego bricks on my desk in front of me, whereas you may be building the same Lego bricks, but on the floor of your living room. So the virtual spaces are shared, but we’re in different physical environments. And then there are co-located Connected Lenses, where you are both actually in the same physical location, and then we both see the same thing,” Pan explained.

He also added that the Lenses will work as long as AR Core is activated on Android and ARKit on iOS. Snap says it will not matter if one user is on a slower device, users should see the other person’s actions almost instantaneously when using these Lenses. Snap says the tool will be available to all creators as part of its Lens Studio 4.0.