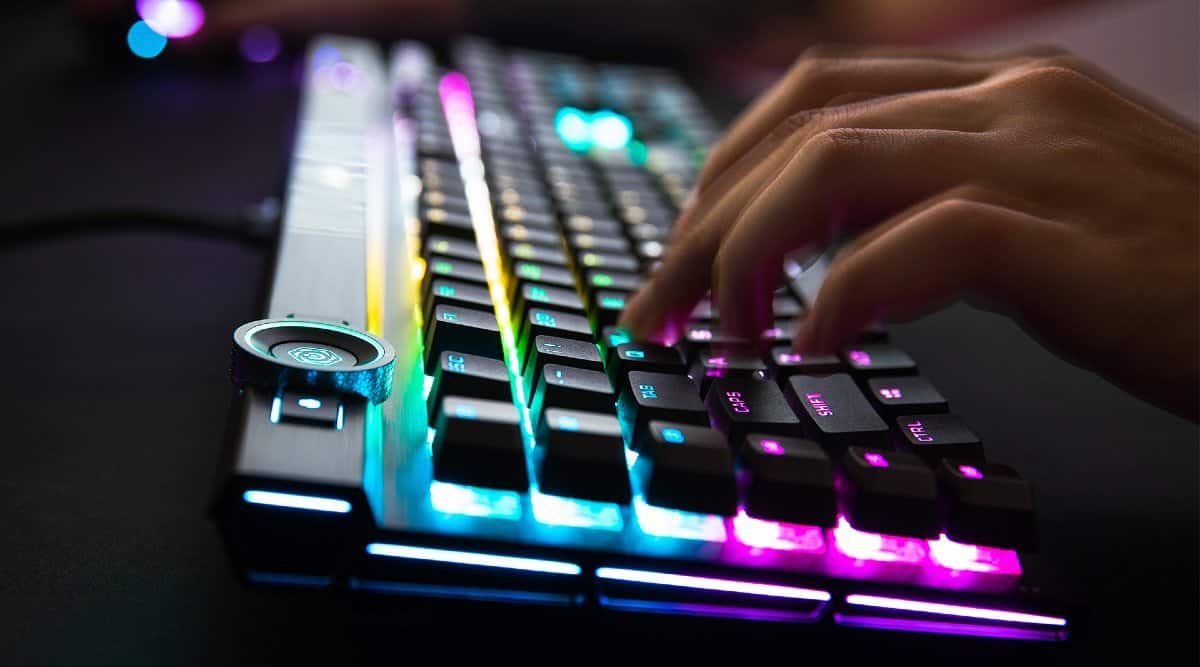 A membrane or rubber-dome keyboard works with a simple spring-loaded switch with no tactile feedback on presses. (Image Source: Pixabay)

Every time we hit a key on such a keyboard, the metal end below the typing surface of the key hits the membrane mesh below, completing one of many parallel circuits and registering a press of that key. The switches themselves are very simple on most membrane keyboards and have no real feedback while typing, except for the reverse force you feel when you have pressed a key all the way to the end.

A membrane keyboard switch hence is just like a light switch, where the switch can either be on or off, without any feedback during the transition. A Cherry MX Blue clicky switch, one of the most common switches used in mechanical keyboards. (Image Source: Cherry MX)

When you type on a mechanical keyboard, the mid-point offers a ‘click’ when you press down the switch. Pressing further beyond the click does get you to the bottom of the switch structure, but the key is registered right at the click, also known as the accentuation point. This basically means that in such a keyboard you needn’t always press all the way down to register the key.

There are various types of mechanical keyboard switches. These included blue switches, the most commonly used ones, known for their high tactile feedback and accompanying loud clicky sound. There are also brown switches that offer slightly less feedback and make lesser noise.

Then there are red switches that are practically silent and have no tactile feedback (making them very similar to traditional membrane keyboards in terms of the feel).

These are some of the popular switch types, but there are also silver switches that have a low accentuation distance of 1.2mm, primarily used for gaming. The right switch for you will be determined by your use case.

What benefits do mechanical keyboards offer?

Mechanical Keyboards offer more tactile feedback, where you can actually tell conveniently if a key has registered or not thanks to the clicky sound and feel halfway through the travel. This results in a comfortable typing experience that is also precise. Since you can half-press a key and still register it, users are less likely to make typos on mechanical keyboards once they grow accustomed to it, especially when touch-typing (Typing without looking at the keyboard, relying entirely on muscle memory).

Apart from the better typing experience, some mechanical keyboards also offer customisation options where each key of the keyboard can be removed and replaced. This lets gamers, for instance, replace the ‘WASD’ keys and other gaming keys with a different coloured surface. Being able to replace individual keys on such boards also means users need not throw away a keyboard when one key stops working.

So, why isn’t everyone upgrading to mechanical keyboards?

Plus mechanical keyboards make more sound than membrane keyboards because of the clicky switches. However, this is not true for all switches. Blue switches, the most common mechanical keyboard switches are notorious for their loud clicky sound, which can quickly get annoying for you and also co-workers sitting nearby.

This is also why Blue-switch mechanical keyboards don’t make good office keyboards. However, you can consider brown or red switches for lesser sound (also at the cost of lesser tactile feedback).

Are mechanical keyboards for you?

However, if you are reliant on a keyboard is for basic typing such as data entry, then maybe you don’t really need a mechanical keyboard. At the end of the day, whether you need to get a keyboard upgrade will come down to personal preference. But if you do make the switch to mechanical keyboards, remember that going back to membrane keyboards will be hard.