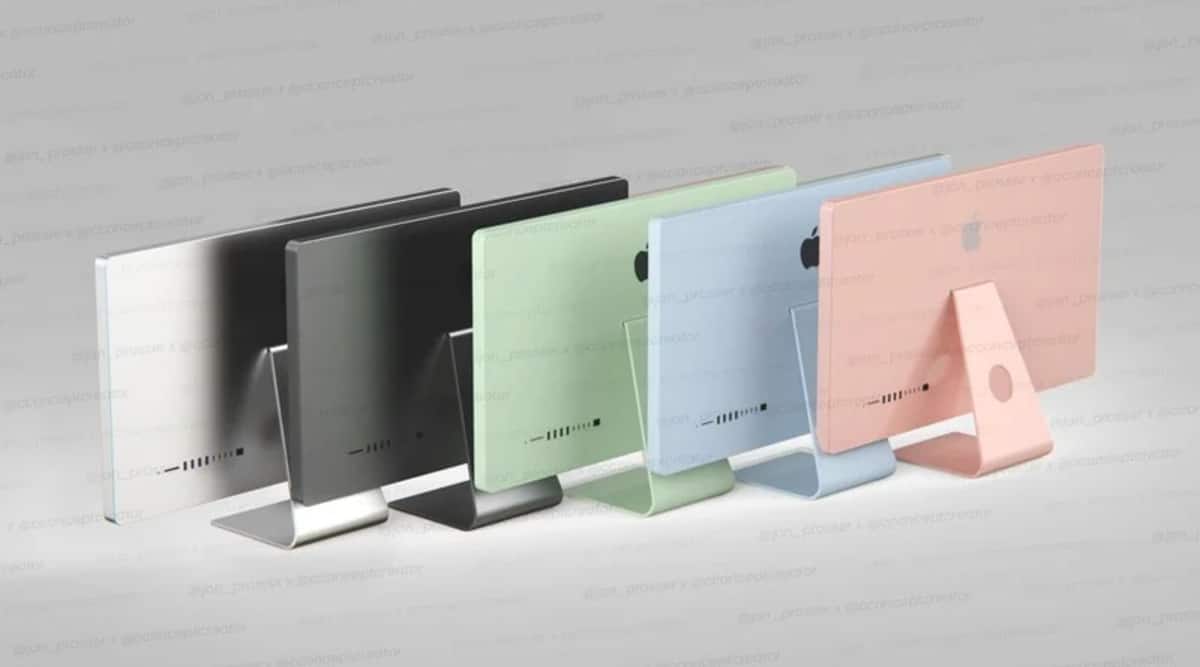 When Apple CEO Tim Cook takes the stage at the Steve Jobs Theater on April 20, he will likely take us back to the memories of the launch of the iMac G3, the iconic computer that not only saved Cupertino from bankruptcy but also made Apple the tech juggernaut it is today. It was the iMac that put focus on the camaraderie between the late Steve Jobs and Jony Ive and helped Apple become the visionary tech company.

It’s been almost 23 years since the first iMac was introduced, and although a lot has changed over the course of these years, Apple’s all-in-one machine continues to play a decisive role in shaping the future of computers. With rumours that the new iMacs were going to be reminiscent of the colourful iMacs of yesteryears, but with modern design sensibilities complete with Apple Silicon inside, we take a look back at the evolution of the iMac.

When Steve Jobs introduced the iMac G3 in 1998, no one had imagined that the first iMac would become one of the most iconic personal computers in history. Unlike other desktop computers of time — mostly uninspiring with beige boxes and towers– the iMac G3 was colourful. The chassis was constructed out of a translucent shell, and came in different colour schemes, with”Bondi Blue” setting the tone of the new playful design language. But more than the design, the iMac G3 introduced USB to the masses as it was the first Mac to feature a USB port. It also ditched the floppy drive. The original iMac G3 featured a 233HMz PowerPC G3 processor, 32MB RAM, 4GB hard drive, and a 15-inch monitor. Thanks to the popularity of the iMac G3, which sold nearly 280,000 units in the six weeks after its launch, Apple returned to profitability in 1998, with earnings of over $300 million. 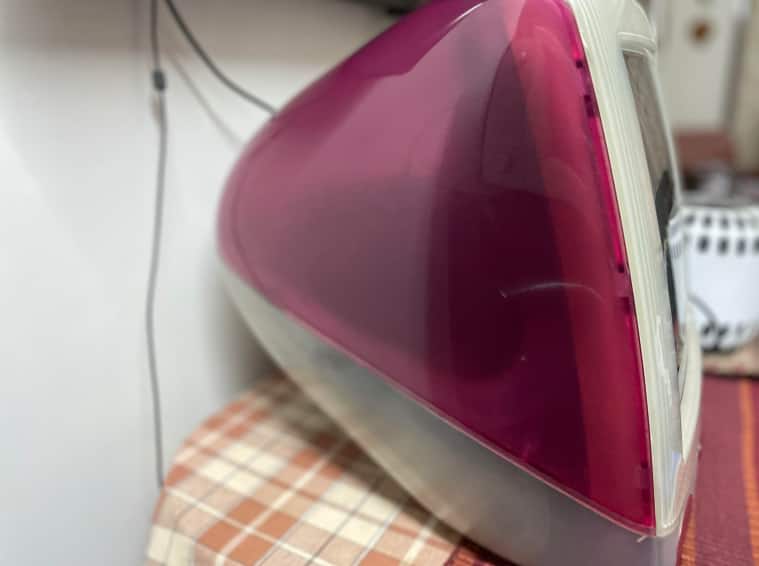 Two years later, Apple showed the world the iMac G4, a major departure from the design language of the iMac G3. While the original iMac had a CRT monitor, Apple decided to adopt a flat-panel display for the iMac G4. But the iMac G4 wasn’t an ordinary-looking Mac. The all-in-one desktop was so unique in design that it was nicknamed “the sunflower Mac”. It was a beautiful machine, with a base that looks like a volleyball and a sunflower on top. The device was all about the flat-screen display, floating in the air, held by a chromed stainless-steel arm that kept the Mac stable. Designed by Jony Ive himself, iMac G4 used a PowerPC G4 processor and ran OS X Jaguar. Even to date, iMac G4 remains the best-looking iMac ever created. 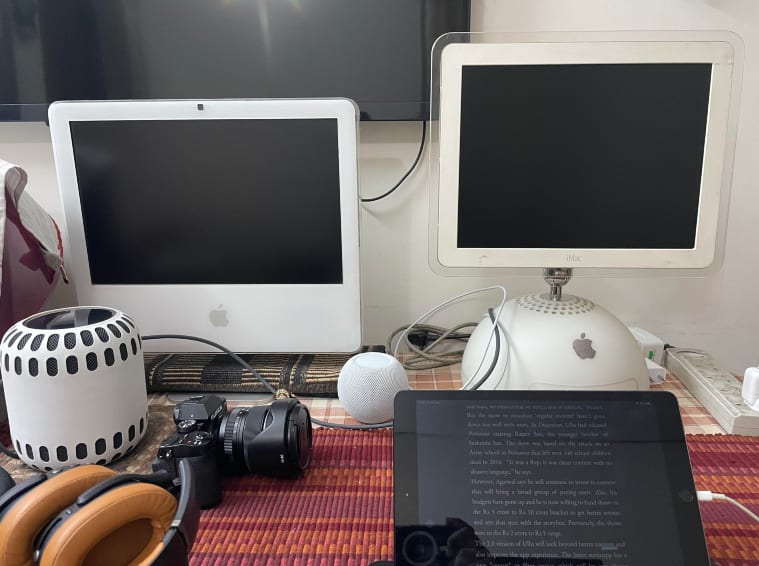 The iMac G5 was a major redesign for the iMac. Introduced at the Apple Expo in Paris in 2004, the iPod-inspired iMac G5 had all the elements of a successful all-in-one desktop computer. It was essentially the flat-screen monitor suspended from its anodised aluminum stand. What made the iMac G5 so unique that the entire CPU fits behind the monitor, making the entire computer more than 2-inch thick. That includes all the core components, including a slide slot for CDs and DVDs. The iMac G5 was a win for Ive and his design team. It was the last iMac to feature a PowerPC processor.

iMac G5 (with Intel inside)

A year after Steve Jobs first announced that Apple would begin a transition from the PowerPC chips to chips built by Intel, Cupertino showed off the iMac G5 (with Intel). The iMac G5, which arrived in January 2006, was the first Mac to feature an Intel Core Duo processor. The design didn’t see a change, but it was the first Macintosh computer to run an Intel processor. Available in 17 and 20-inch screen sizes, the base 17-inch model offered a 1.83-GHz Intel Core Duo processor, a PCI Express-based ATI Radeon X1600 video card with 128MB of GDDR3 memory, and a 160GB Serial ATA hard drive running at 7,200 rpm. The machine cost  $1,299. The iMac G5 also included the iSight camera for video chats, an updated mighty mouse, and iLife 2006.

Here are some lesser-known aspects of iMac

🔴 Not many people know that the “i” in iMac stands for the Internet. Back in the late 90s, the internet was still far from hitting mainstream status. It was the iMac G3 that started the trend, with the “i” standing for the Internet. The G3 had a 56.6Kbps modem, and packed 10/100 BASE-T Ethernet, which made it easier for consumers to jump onto the internet and browse the web.

🔴 Ken Segall — the man behind the famous Think Different campaign — dreamed up the name “iMac”. Segall, a veteran creative director, worked at Apple’s agency, TBWAChiatDay, back in the day.

🔴 The iMac G3 was designed by Jony Ive. Having worked at Apple for 30 years (he left Cupertino giant in 2019), Ive is behind a number of hit Apple products over the years including the iPhone and Apple Watch.

🔴 Released in August 1998,  the original “Bondi blue” iMac (its colour reportedly is an homage to the famous Australian beach, where one of the industrial designers, Danny Coster, would go to swim).

For years, Apple kept its white polycarbonate white iMac G5 alive but in 2007 it decided to replace the popular all-in-one desktop computer with an iMac with a modern look. The white look was replaced with anodised aluminum with a black bezel around the display. It was quite different from a white iMac G5. The contemporary iMac sported a glossy display, a flat back, and a large, glossy black Apple logo at the top center. The new iMac was powered by Intel Core Duo processors, an ATI Radeon 2400XT GPU, and ran OS X Tiger. The low-end model cost $1,199. 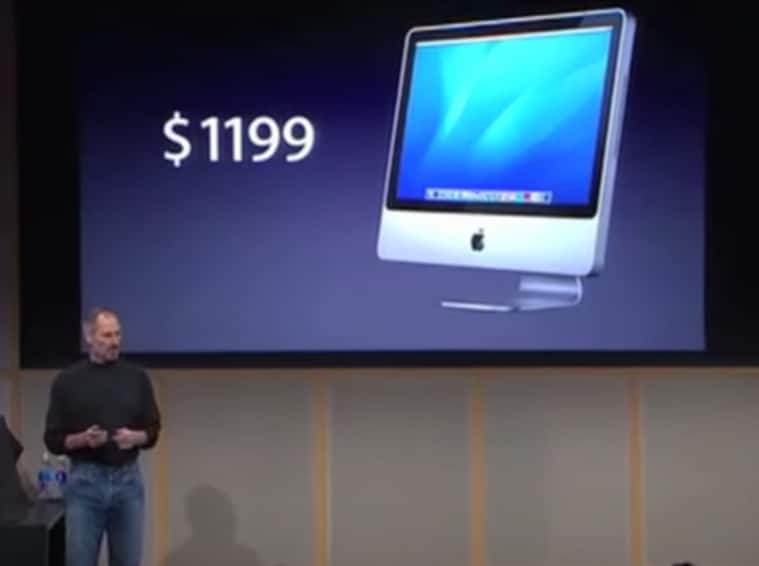 The new iMac was released in 2009, although still aluminum, it was the first all-in-one desktop computer with its unibody design. For the first time, Apple offered the iMac in 27-inch screen size and 16:9 aspect ratio. In fact, the iMac 27-inch marked a big change for the desktop computing market. Before the arrival of this iMac, big-screen displays were only aimed at professional users but the iMac’s 27-inch screen helped to get a high-definition display mainstream. Not to forget, this iMac’s screen had edge-to-edge glass. The updated iMac was accompanied by the new Magic mouse.

The 2012 version of the iMac all-in-one desktop computer marked a significant redesign. The machine retained the same premium look one would expect from Apple’s high-end desktop computer but it was shaved off and included a tapered design with the 5mm thick edge. Not just the design, the iMac received faster processors, new fusion drive options, and the latest Nvidia graphics. Apple hasn’t tweaked the iMac design since 2012, and while the aluminum unibody design still looks good, its huge bezels look old.

Although not a redesign, Apple finally updated the iMac with a Retina display. With 14.7 million pixels, the 5120 x 2880 resolution was four times the pixels offered by the standard 27-inch iMac. The iMac with 5K Retina display had been requested by professionals for a long time, and Apple just delivered that. The base model included a  3.5GHz quad-core Intel Core i5 processor, 8GB of memory, a 1TB Fusion Drive, an AMD Radeon R9 M290X graphics processor with 2GB of GDDR5 memory, two Thunderbolt 2 ports, four USB 3 ports, and 802.11ac wireless. The 21.5-inch 4K Retina display model was launched a few months later. 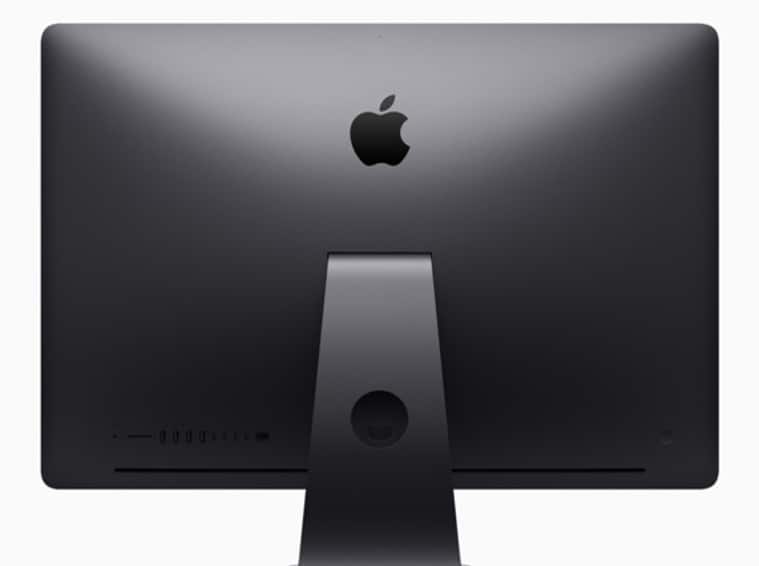 Apple announced the iMac Pro, once the “most powerful Mac ever”, in 2017. It was a powerful Mac for its time, featuring up to 18 Xeon processor configurations as well as Radeon Pro Vega graphics. It looked spectacular, with that space grey finish. Its price was mouthwatering, starting at $4,999. With no hardware updates over the last four years, it slipped somewhat into obscurity. It served its purpose as a professional Mac for designers, developers, and animators. Apple recently discontinued the iMac Pro.