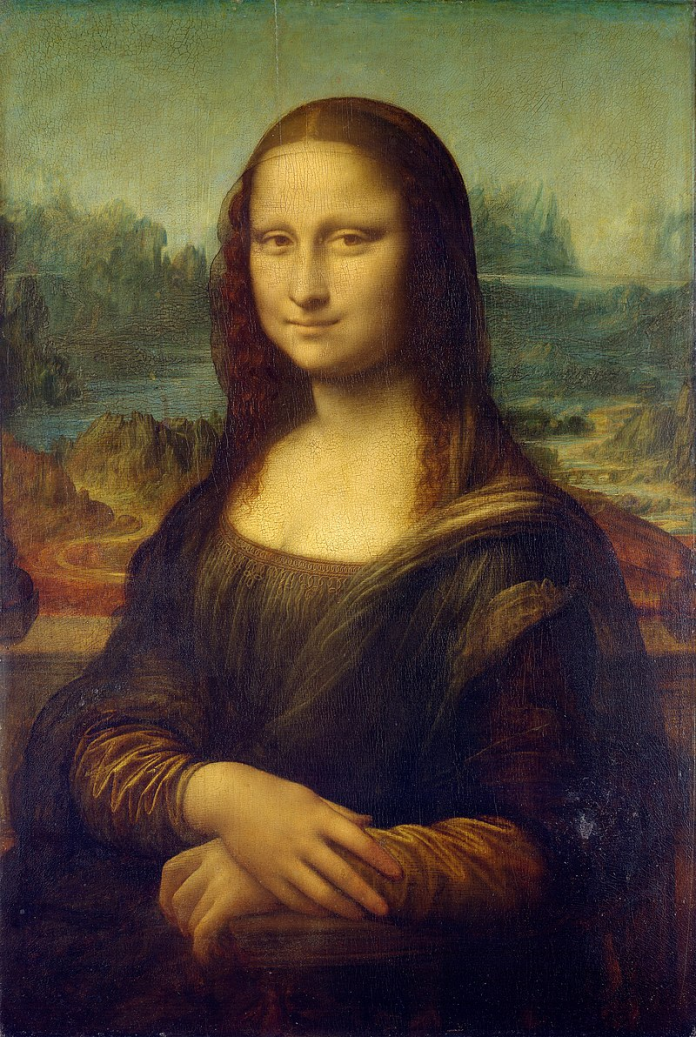 The “Mona Lisa” is one of the most famous portrait paintings in art history, and over more than 500 years, the artwork continues to amaze and intrigue audiences. Started circa 1503, it shows Lisa Gherardini, an Italian noblewoman.

Technically, da Vinci’s masterpiece is quite advanced for the time. The artist employed his sfumato technique, used to soften the transitions of color and create a more natural-looking painting. Leonardo Da Vinci used this technique in many of his masterpieces.

Perhaps the most famous aspect of the painting is the facial expression of the sitter. One of the oldest mysteries in art history, the viewer would have a hard time deciphering the true nature of her expression. Is she really smiling? What was she thinking? Does her gaze really follow you when you waLeonardo Da Vincilk around the room?

“American Gothic”, painted in 1930 by the American painter Grant Wood, is one of the most recognized images, and certainly one of the most famous artworks in the world. As a result, it has been referenced and parodied countless times in pop culture.

Wood’s artwork is an iconic representation of the 20th-century rural United States. It shows a man and a woman; they are commonly mistaken for being husband and wife, but they are, in fact, father and daughter. She wears a colonial apron, while the man wears overalls and a suit jacket; he also holds a pitchfork, reinforcing the rural nature of the artwork. The models of the artwork are Nan Wood Graham, the artist’s sister, and Dr. Byron McKeeby, their dentist.

The name comes from the architectural design of the house in the background, known as Carpenter Gothic. This style is characterized by taking architectural elements of the original medieval Gothic style applied in carpenter-built North American houses. In the painting, the most prominent element of this architecture is the window, which really resembles the arched window of a Gothic church.

“Las Meninas” is a magnificent and mysterious group portrait by the Spanish painter Diego Velazquez. Although the main subject of this art portrait is 5-year-old Princess Margaret Theresa, daughter of King Philip IV, the composition is composed of 12 figures. The paintings show the Princess and her entourage, including her bodyguard, chaperone, maids of honor, a dog, and two little people, common figures in royal courts at the time.

The painting is not only striking from a technical standpoint, with masterfully executed lighting and materials, but it also amazes for its enigmatic, mysterious aura. This happens because of some key elements. First, Velazquez depicted himself working on the painting while looking at us, the audience, as if aware of our presence.

Secondly, in the back of the composition, we see a silhouette of a mysterious figure standing in a doorway, effectively becoming the vanishing point of the whole scene. This figure is thought to be Jose Nieto Velazquez, the queen’s chamberlain and possible relative of the artist. It’s unknown whether Jose is leaving or arriving at the scene.

Another riveting aspect of the painting is the presence of King Philip IV and Queen Mariana of Austria. Their presence in the composition is not physical, however. They appear, quite discreetly, as mere reflections on a mirror in the back of the room.

Gustav Klimt’s “Portrait of Adele Bloch-Bauer”, finished in 1907, is one of the world’s most famous and expensive artworks. Beautifully made with leaves of actual gold, this masterpiece is the main representative of Klimt’s Gold Phase, characterized by magnificent and opulent paintings.

Here, Klimt depicted his close friend, patron, and maybe something more, Adele Bloch-Bauer. In addition to another portrait, she also appears in Klimt’s Judith and the Head of Holofernes. The painting also had a troubled history. After being seized by the Nazi regime in 1941, the masterpiece took over 60 years to find its way back to the care of its rightful owners, following a lengthy judicial process. Finally, after being returned to the heir of the Bloch-Bauers, it was sold for the astounding amount of 135 million dollars.

Girl with a Pearl Earring

Another of the most famous paintings of all time, the “Girl with a Pearl Earring”, is considered the “Mona Lisa” of the north. Johannes Vermeer’s masterpiece, estimated to have been created circa 1665, continues to amaze audiences to this very day and also served as inspiration for several other works of art, including paintings, literature, plays, and movies.

The painting is a tronie, a kind of portrait painting very common during the Dutch Golden Age. This style of painting is characterized by small portraits of various characters, often with exaggerated facial expressions. It shows a European woman wearing a turban. Despite the title of the painting, some scholars suggest that she

Portrait painting is not only a mere recreation of the likeness of a person, but a way to explore a wide range of emotions and interpretations that transcend the appearance of the sitter. From the Renaissance to contemporary art, portrait painting originated several of the most iconic works of art in the world and certainly will continue to originate many more.