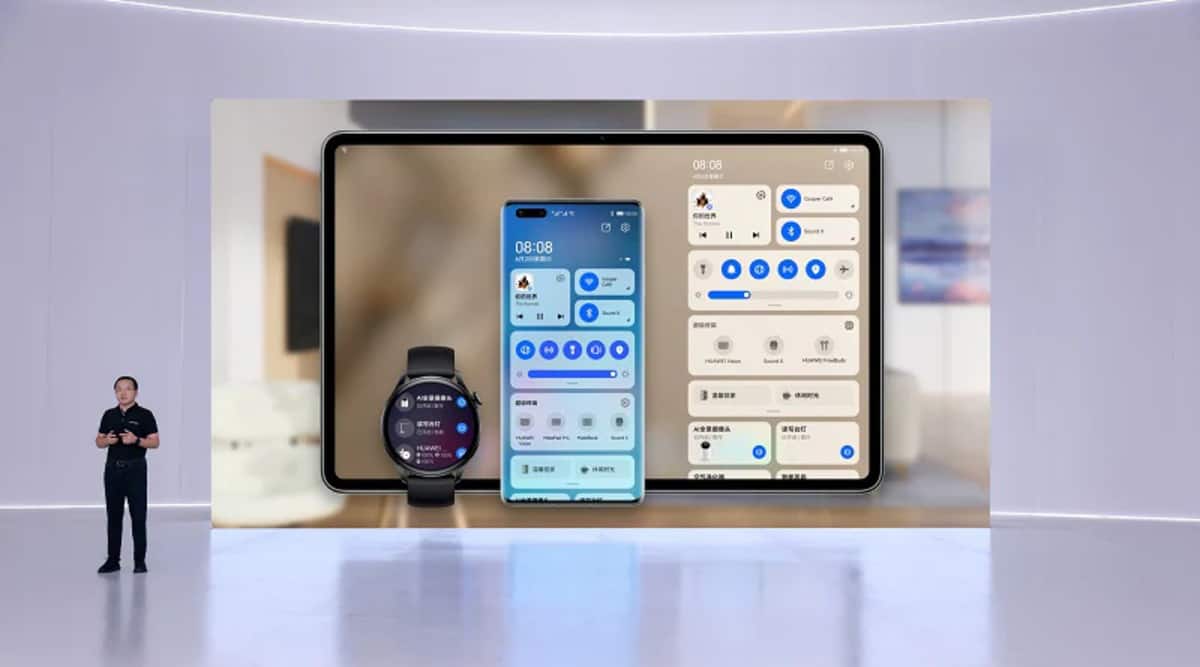 Huawei hosted a big event on Wednesday, where it announced a range of new products and showed off its latest Harmony OS 2.0 software. The Chinese company also took the wraps off its Huawei MatePad tablets and even showed a short promo of the Huawei P50 series. It even unveiled Huawei Watch 3 series as well as some gaming monitors. Here’s everything you need to know about the event.

Huawei to update its 100 Android devices to HarmonyOS

The company is planning to update its 100 Android devices to HarmonyOS 2.0, which is the second major version of its new operating system. It is important to note that this will first happen in China and then in other regions. As of now, there is no word on when the company plans to update the devices that are available outside China.

Huawei has also launched three MatePad tablets that are running on its HarmonyOS operating system. The latest 10.8-inch MatePad Pro device packs a Snapdragon 870 processor, while the 10.95-inch Huawei MatePad 11 is powered by a Snapdragon 865 chipset. There is also a flagship 12.6-inch MatePad Pro tablet, which features the company’s home-brewed Kirin 9000E processor.

Both the MatePad Pro tablets from Huawei have a selfie camera, which is placed in the middle of the side bezel. At the back, there are three cameras with a dedicated 3D depth sensor. The panel of both the models supports HDR 10 and DCI-P3 colour gamut.

The devices have a total of eight speakers that are tuned by harman/kardon and four microphones. Both models get 8GB of RAM and either 128GB/256GB of storage. They offer support for multi-screen collaboration with PCs. The 12.6-inch tablet can also be used as a drawing board in Mirror mode and a monitor in Extend mode.

Huawei claims you will get up to 14-hours of mixed usage on a single charge with MatePad Pro 12.6. It supports 40W fast wired charging, 27W wireless charging and 10W reverse wireless top-ups. The devices support the company’s new M-Pencil stylus and smart magnetic keyboard. The MatePad Pro 12.6 is priced at € 799 in Europe, which is around Rs 71,310. The pricing details for the 10.8-inch model are currently under wraps.

Huawei’s MatePad 11 model has a 7,250mAh battery, similar to the 10.8-inch MatePad Pro device. The cheaper version supports 22.5W fast charging and is also compatible with the new M-Pencil. The panel supports 120Hz refresh rate as well. It features a quad-speaker setup with the same Harman/Kardon sound tuning. The new Huawei MatePad 11 will be sold for €399 (approximately Rs 35,610) in Europe.

Huawei took the wraps off two new wearables, including Watch 3 and Watch 3 Pro. The latter features a 3D rotating crown, which is also weather-resistant. The company claims that this will work with both wet or gloved hands, which isn’t the case with touchscreens.

The standard model has a 1.43-inch AMOLED panel with 1,000nits of brightness and 326ppi pixel density. The smartwatch’s body is made out of high-quality steel and the back is ceramic. It has 5 ATM rating, meaning it is water-resistant.

The fitness watch comes with a heart rate sensor, a skin temperature sensor, and 24/7 stress and sleep tracking sensors. It can monitor blood oxygen (SpO2) and there is a built-in speaker as well. It supports eSIM, so users can listen to music or make calls. There is a fall detection feature too, which can use the eSIM to send out an SOS if you are hurt.

The smartwatch even has Huawei’s AppGallery, so you can download and install HarmonyOS apps on the watch. The device is equipped with 2GB RAM and 16GB storage. It supports over 100 modes, including 17 professional workout modes. Huawei claims users will get 3 days of battery with 4G enabled. One can charge the smartwatch wirelessly.

The Huawei Watch 3 Pro offers similar features and differs in terms of materials and battery life. The watch body is made out of titanium and the panel has sturdier sapphire glass. Huawei claims this one will give up to 5 days with 4G enabled. Unlike the standard version, the Pro model even features a dual-band GPS receiver (bands 1 and 5) for a more accurate and more stable position reading. The Huawei Watch 3 price is set at €335 (around Rs 29,900), whereas the Pro version will cost €425 (roughly Rs 37,930).

Huawei not just launched new tablets and smartwatches, but also two new gaming monitors. The latest Huawei MateView GT can be used for gaming as well as video editing. It is equipped with a 34-inch LCD panel with 21:9 aspect ratio, 165Hz refresh rate, 350nits of brightness, 4,000:1 contrast ratio and a curvature of 1500R.

There is also a built-in soundbar with stereo speakers, and two mics for voice chat. The soundbar features an RGB-backlit touch control that can be used to adjust the volume. You can customize lighting effects too. The stand height can be adjusted and you can tilt the display. The gaming monitor ships with a 135W adapter.

The Huawei MateView, on the other hand, sports a flat 28.2-inch IPS LCD with a 3:2 aspect ratio, 3840 x 2560 pixels resolution, 500nits brightness, DisplayHDR 400 certification and flicker-free DC dimming. The panel supports 10-bit colour depth, 98 percent of DCI-P3 and 100 percent of sRGB. It comes with 65W charging support, a mini DisplayPort 1.2, an HDMI 2.0 port, and two USB-A 3.0 ports as well. Huawei is yet to reveal the pricing details for the global market.

At the event, the company also showed off its upcoming Huawei P50 Pro smartphone. The short video published by Huawei shows that the flagship device has a quad rear camera setup. It features a glass back and has a beautiful, thin and light design. The teaser suggested that the handset will offer a great photography experience to users. However, there is no official word on when the Huawei P50 series will launch.