I wouldn’t be surprised if you haven’t heard about a Chromebook, a budget-friendly alternative to Windows laptops or MacBooks. For years, Chromebooks, running Google operating system Chrome, have remained out of India’s mainstream notebook market. Although attempts have been made by various OEMs to bring Chromebooks to India in the past, they never really caught users’ attention. However, with the recent surge in demand for low-cost notebooks during the Covid-19 pandemic, there have been some efforts from traditional PC makers such as HP to launch Chromebooks aimed at students and first-time notebook owners in India. When I received the latest HP Chromebook 11a a few days back, the big question for me was, will this low-cost machine be able to make a significant difference in the life of a tech writer? Here is my review:

HP Chromebook 11a: Design and build

The Chromebook 11a doesn’t look like an expensive notebook with an aluminum build and premium design, and that’s okay. Instead, the attention to detail is given to how to make a notebook lightweight and small enough so that it doesn’t command much desk space, and fits easily in a backpack. I must say this thing is light, just 1kg and really easy to carry around. Even though the Chromebook 11a has a basic plastic-looking appearance, the indigo blue colour is striking. This is obviously subjective. The chassis has little to no flex. I’d consider the build quality good, considering the price of the notebook. 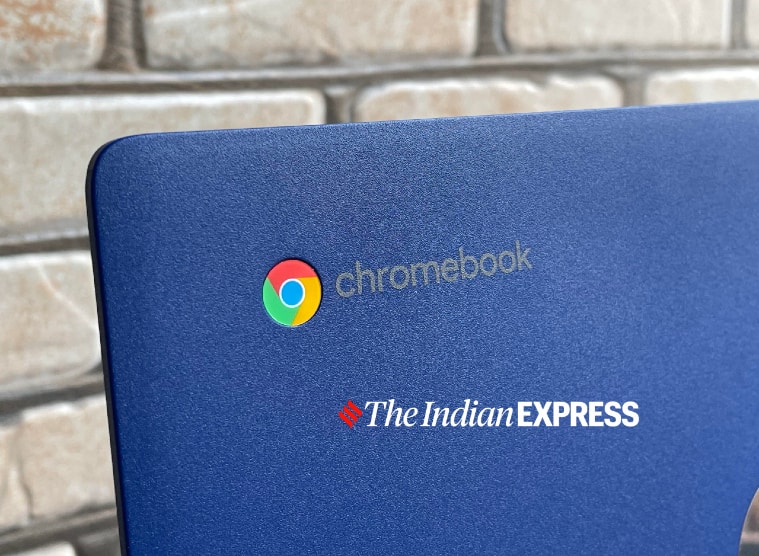 Even though the Chromebook 11a has a basic plastic-looking appearance, the indigo blue colour is striking. (Image credit: Anuj Bhatia/Indian Express)

The Chromebook 11a is fairly minimal when it comes to ports, offering a USB 2.0 Type-C port which should be handy for charging and connecting accessories, one USB 2.0 Type-A port, as well as a microSD card slot, and an audio combo jack. That should be fine for someone who wants a notebook for basic web browsing and email but I would have liked another USB-A port, considering a lot of people still use wired mice and accessories.

I was pleasantly surprised by the keyboard. Look, the keyboard matters to me – after all, I write for a living. The keyboard is phenomenal with a satisfying travel and the click and feel of the keys made the typing experience so much better. In fact, I had no issues adjusting to the keyboard. This is the best keyboard I’ve ever used in a budget notebook. The only thing it’s missing is backlighting, a feature you will find on expensive notebooks. The trackpad is a tad shallow in my opinion, but it never bothered me much honestly. The trackpad is fast, responsive, and arguably impressive when you consider the notebook only costs Rs 21,999. 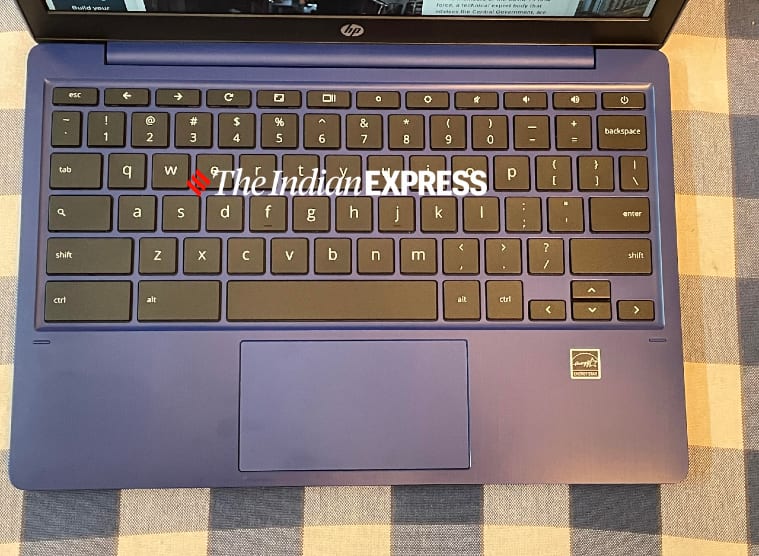 Open the lid, and you will see old-fashioned bezels surrounding the 11.6-inch screen. It’s a low-resolution display (1366x768p) but it supports touch, which is a nice feature to have on a notebook. Don’t expect colours to pop off the screen but the screen isn’t terrible. I used the Chromebook 11a as my daily driver for weeks, and frankly, it’s bright and has adequate viewing angles. Above the screen is a 720p webcam. The video quality was okay when I did a video interview on Zoom. The person on the other side could see me clearly, though the webcam’s quality degrades in low light. The microphone, located next to the camera, isn’t bad either. I think the webcam is more than adequate for attending online classes. 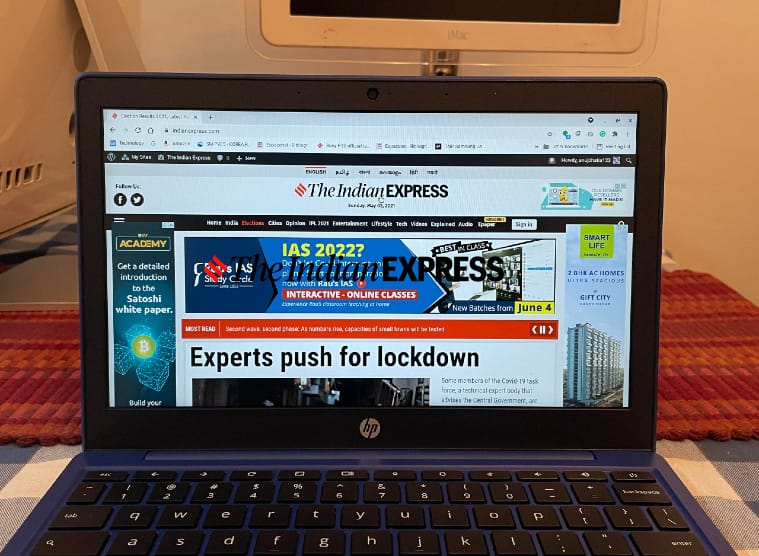 I used the Chromebook 11a as my daily driver for weeks, and frankly, it’s bright and has adequate viewing angles. (Image credit: Anuj Bhatia/Indian Express)

While the Chromebook 11a’s speakers weren’t best for watching Netflix, they seemed fine during a quick video call on Microsoft Teams. Though I must say the speakers didn’t disappoint when listening to casual music or watching YouTube videos. But I highly recommend an external speaker if you are a movie buff.

One of the things that make the Chromebook 11a stand out from the Windows notebooks is the performance. This is where things get really interesting. This thing is powered by a Mediatek MT8 183 processor with 4GB RAM and 64GB eMMC storage (100GB of Google Drive for one year is included as part of the purchase).

Since this is a fanless, mobile processor, these specs – even though on a lower side- fly on a Chromebook. Because ChromeOS is light (more on the operating system later), this Chromebook 11a doesn’t have a problem running 25 Chrome OS tabs at once. I never experienced any slow down on this machine, even when running multiple Android apps running in the background. Websites like indianexpress.com load quickly, and there were no issues with multitasking. That’s what most consumers do on their laptops. Be clear: this is not a notebook for the serious workload. If you ask me what you can do on a Chromebook, I would say casual web browsing and writing in Google Docs. In fact, the experience of using Google Docs on this machine isn’t different from when I used the online word processor on the expensive Asus ZenBook Duo. Chrome OS is simple and easy to use. (Image credit: Anuj Bhatia/Indian Express)

Just to make it clear, Chromebooks run on Google’s native Chrome OS. It’s a lightweight operating system, which is basically designed to run web-based apps like Chrome browser, Gmail and YouTube. Using a Chromebook is easy as there is no learning curve. The instant experience is great but you can’t run legacy Windows or macOS programmes, which makes Chromebook unfit for a lot of folks who expect a bit more from their notebook like running AAA games or editing 4K videos. The Chromebook 11a has the ability to download and install Android apps. (Image credit: Anuj Bhatia/Indian Express)

Though you can run casual games on a Chromebook, thanks to its ability to run Android apps via Google Play Store. The experience of running Android apps on a Chromebook is mixed, however. Given most apps are made for mobile devices, I have had trouble running a few popular ones on this machine. The best way to experience those apps is to use their browser-based versions. But on the other hand, there is an added advantage of having the ability to download Android apps. For example, in our organisation, we need to connect to a VPN to access the CMS. Unfortunately, the VPN we are asked to use has no dedicated Chrome OS app. Thankfully, I was able to download the VPN app from the Play Store and run the CMS on my Chromebook smoothly. The battery is…well amazing. My review unit lasted between 11 and 12 hours on a single charge. That’s enough to get through most of your workday. I have not seen even a premium Windows notebook to last that long. The attention to detail is given to how to make a notebook lightweight and small enough so that it doesn’t command much desk space, and fits easily in a backpack. (Image credit: Anuj Bhatia/Indian Express)

HP Chromebook 11a review: Should you buy it?

If you live in Google’s ecosystem and need a simple-to-use notebook, HP’s Chromebook 11a is for you. The Chromebook 11a seems perfect for what I want from a notebook — superb battery life, light and easy to travel with, and a great keyboard. This device is designed for basic computing tasks, and for Rs 21,999, I think HP is asking a fair price. I don’t mind recommending the HP Chromebook 11a to family and friends looking for an affordable notebook that is not a Windows machine. The Chromebook 11a proves our computing needs can be met by a web browser