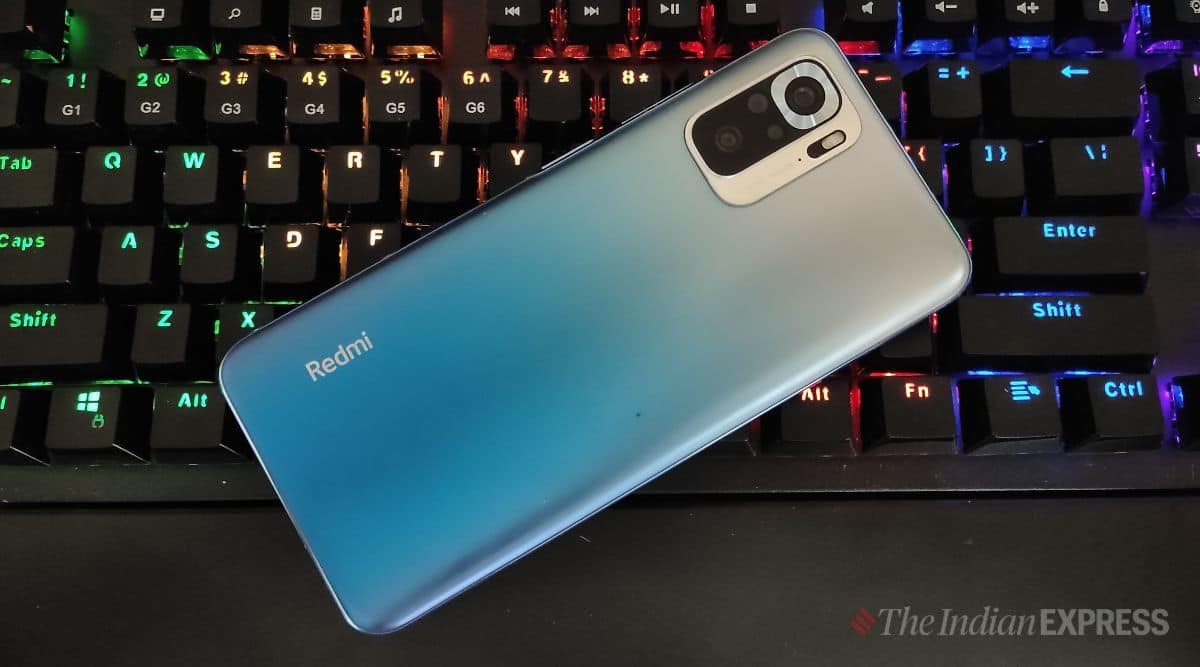 When we first heard about the Redmi Note 10S, we were confused as to why Redmi needed a fourth device in the Note 10 series, which covered the budget to mid-range smartphone segment pretty well with the existing three devices. The fact that the Redmi Note 10S starts at just Rs 1,000 lower than the Redmi Note 10 Pro made its existence even more questionable.

We have now spent about a week with the Redmi Note 10S and here’s what we think about it, starting with a quick look at its specifications.

The Redmi Note 10S is a good looking phone and it’s also one that feels great in hand. The design aesthetics seen on the other Redmi Note 10 variants are found here. The slim 8.3mm build is great to hold, and the back is also gorgeous. However, the plastic back makes the phone a little slippery.

We also loved the stereo speaker design on the Redmi Note 10S that has outputs from nearly diagonal points of the phone’s chassis. This makes it hard to block both speakers when playing games or watching movies. The speaker output is not exactly even across both panels, however, this is still a better experience than having a single speaker. 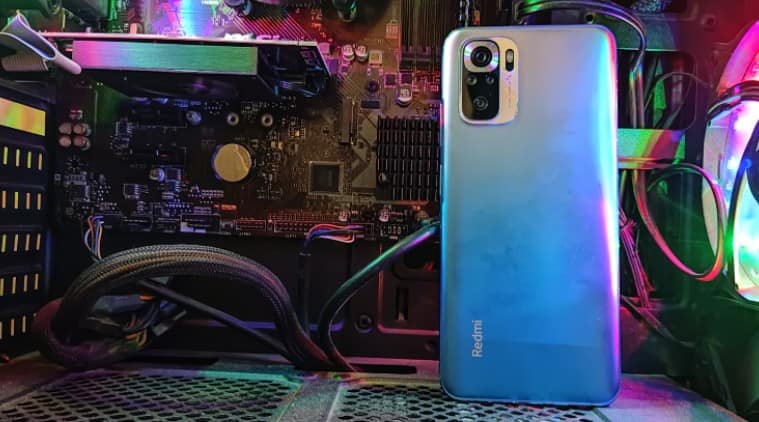 The Redmi Note 10S features the same design as the rest of the Redmi Note 10 series, which is definitely a plus point. (Image Source: The Indian Express/ Chetan Nayak)

While we initially wished the phone would add an in-display fingerprint reader to the AMOLED panel, the speed and accuracy of the side-mounted scanner quickly put those thoughts to rest. A good side-mounted scanner is any day better than an average in-display scanner. The scanner and power button assembly is a protruding button instead of a depressed one, making it easier to find and press.

The Redmi Note 10S screen carries the FHD+ AMOLED screen from the Note 10 series and we get the same great viewing experience coupled with good viewing angles and great outdoor visibility. With MIUI’s range of customisation options, users can also manually set a colour temperature to their liking. A DC dimming feature is also baked in to avoid flickering in low brightness scenarios. The display is protected by Corning Gorilla Glass 3, so there’s some level of resistance against basic scratches. The Redmi Note 10S has an AMOLED screen that is fairly bright even under direct sunlight. (Image Source: The Indian Express/ Chetan Nayak)

Redmi Note 10S delivers good performance for day-to-day tasks and can run a number of apps at once with ease. However, MIUI’s app management can be hit-or-miss at times, so expect a few apps to quickly restart when you switch back to them after opening a few other apps. Gaming performance was also good and we tried a full match of Call of Duty Mobile and the phone performed smoothly at max frame-rate settings, only dropping 2-3 frames throughout the 30+minute match. Thermals were good as the phone got a little warm on the top half of the screen and on the back near the camera module, but we wouldn’t call it hot.

One of the major changes of the phone from the Redmi Note 10 is the presence of a new 64MP primary sensor and this is a good one. Shots were fast to capture and appeared crisp and vibrant without too much post-processing. The high megapixel count also means you can zoom into the viewfinder before taking a shot and still get crisp results. Night mode results were also good at capturing light when the phone was kept steady. 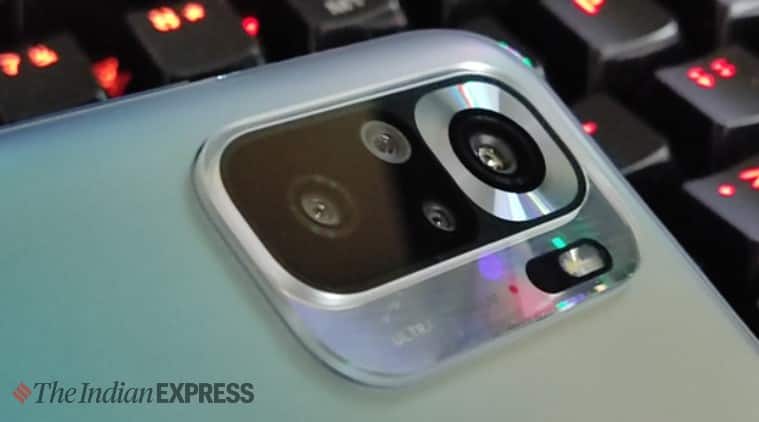 The Redmi Note 10S has a quad-camera setup on the back with a 64MP primary camera. (Image Source: The Indian Express/ Chetan Nayak)

Coming to the other lenses, we experienced average performance. The ultra-wide sensor takes decent shots in good lighting, but as expected, pictures are on the softer side. The 2MP depth and macro sensors get the job done provided good lighting, but will not give above-average results. The front camera, however, took pictures that were too soft for our liking.

Check out all our camera samples on Flickr by clicking on the picture below. 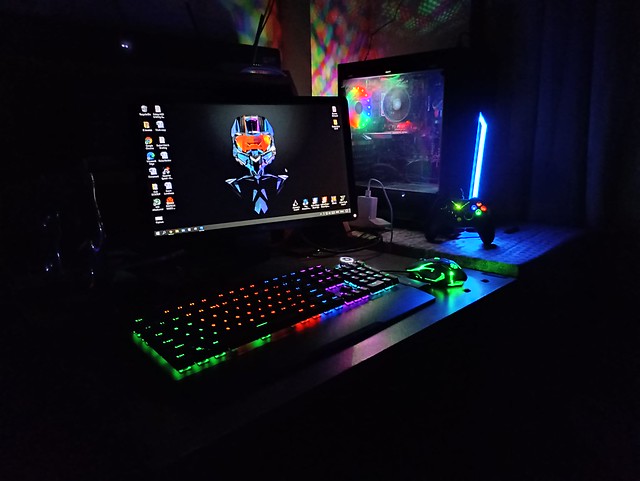 Thankfully, the MediaTek Helio G95 is powerful enough to enable 4K recording at 30fps on this phone. Although you can also record at 1080p at 30fps or 60fps.

The 5,000mAh battery on Redmi Note 10S performs well and light users can squeeze up to two average days on a full charge. However, for moderate to heavy users, a full day of social media, work and a little gaming should not require more than a single charge.  The 33W fast charger bundled inside is also great for getting quick charging. A charge to even 70 per cent when you’re in a jiffy should get you through the day with ease.

There isn’t a lot the Redmi Note 10S does wrong. However, if we were nitpicking, the phone could have implemented a higher-refresh-rate display for those of us looking for that smooth scrolling action. The two 2MP sensors don’t really offer much. Perhaps a higher-resolution ultrawide sensor would have made this a more well-rounded rear camera setup. The front camera is simply too poor for anything beyond a few casual selfies and video calls.

The phone has launched with what Redmi calls an ‘interim build’ of MIUI 12.5, Xiaomi’s latest skin. But the update doesn’t include of MIUI 12.5’s biggest features at the moment and that is ability to uninstall non-core system apps. Users who get the Redmi Note 10S will still have to wait for a later update that should bring this functionality.

Verdict: Should you buy the Redmi Note 10S?

At just Rs 1,000 more, the Redmi Note 10 Pro offers a more capable Snapdragon 732 processor, a higher resolution front camera and macro camera and a 120Hz refresh rate, with the rest of the spec-sheet and the design pretty much the same as the Redmi Note 10S. The extra features make the Note 10 Pro a clear winner here. But if your budget very strictly limits you to Rs 14,999, then the Redmi Note 10S is a pretty good value for money phone.