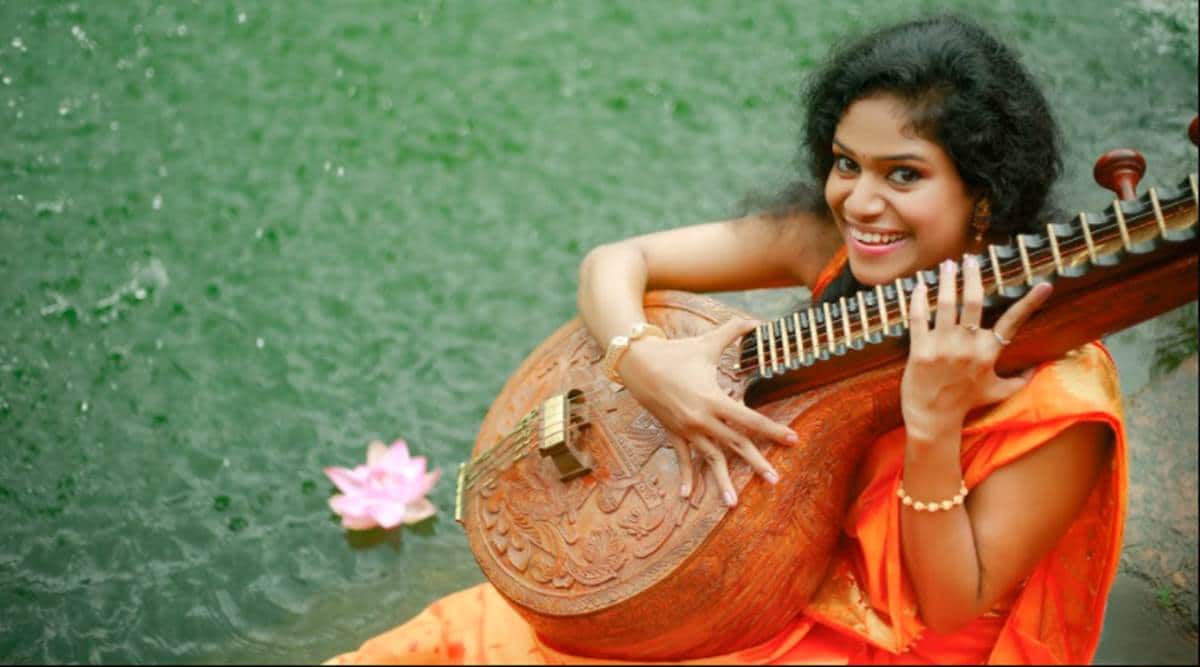 She was all of five when she started with her Indian classical music training. Two years later, she held the Saraswati Veena in her tiny hands. She went on to learn as much as she could about music — even performing at several festivals. But Dr Tara Rajendran had one other calling. She ultimately got dual degrees — one in medicine, and the other in music — marrying the two most important aspects of her life, thereby becoming a ‘physician-musician’, a rarity.

In conversation with indianexpress.com, Dr Rajendran spoke about her journey, the importance of music in medical treatment, why she thinks India does not have a recognised body for clinical music therapy, and why she believes it is important to have a cross-disciplinary intersection of music and medical science.

“I used to perform a lot, but once I joined medical school, I did not have a lot of time. I did my bachelors and masters in fine arts — in ‘Veena’ — from the Annamalai University. In medicine, I had a special interest in oncology,” she shared.

When Rajendran was four years old, her maternal grandmother succumbed to cancer. Later, when she became a medical student, the book ‘The Emperor of All Maladies — A Story of Cancer‘ by Siddhartha Mukherjee roused her interest. “I grew up wondering how my grandmother would feel a tad relieved from anxiety and pain whenever my parents would play Carnatic music. She was suffering from leukemia. My parents revered classical music, and after my grandmother’s passing, they put me into Carnatic vocal classes.”

The seven strings of the instrument enchanted her young mind. She was taken by the sound that is created “when you pluck the second string (anusarani) followed by the first (sarani)”. “My seven-year-old mind associated it with the ‘break of dawn’. Two decades later, I still cannot find a better analogy!” she told this outlet.

During the course of her medical research in oncology/hematology, Rajendran received grants from Indian Council of Medical Research (ICMR), along with an opportunity to go to the US for nine months of clinical rotation. “At Harvard, my mentor saw my passion for music and oncology separately. He encouraged me to explore the intersection,” she said, adding, the two discussed how music could help cancer patients and their caregivers deal with emotional turmoil and anxiety. 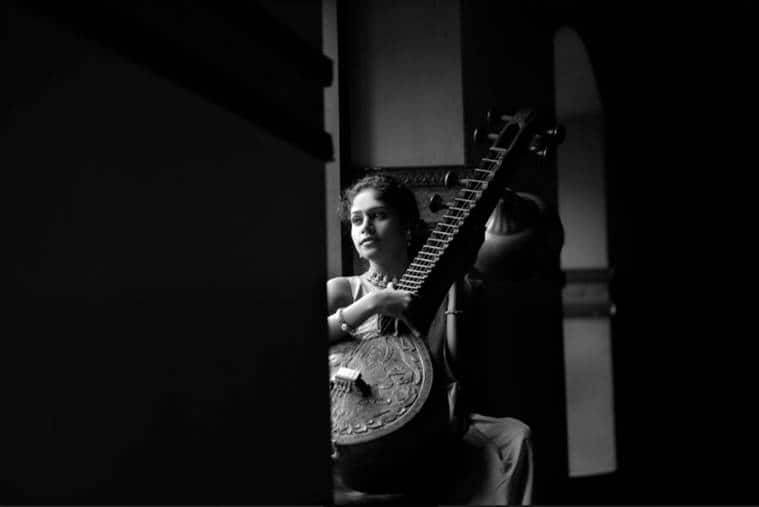 When Rajendran was four years old, her maternal grandmother succumbed to cancer. But she remembered the therapeutic effect that Carnatic music had on her.

She went to read about music therapy and upon her return to India, her professors suggested she take up ‘randomized controlled trials’, “which are research techniques wherein out of two groups of cancer patients, only one group would be given musical intervention”.

Rajendran was given an opportunity to go to Stanford University during her final year of medical school for two months. “I had this patient who asked me what instrument I play. When I told her about the Veena and even played it for her, she was fascinated.” It was a moment of epiphany for her, which led to a ‘lecture concert’.

Dr Rajendran founded the first-ever lecture concert series for Indian classical music in palliative oncology. It was a small session, wherein she invited the oncologists who taught her, her colleagues and other healthcare staff.

Expounding the uniqueness of the series, she said: “The target audience is oncologists, pain and palliative care physicians, and medical students. They could together create evidence for musical interventions specific to Indian society through randomized controlled trials. In the lecture, I illustrate the latest international clinical trial outcomes from the peer-reviewed medical literature, the neuro-psycho-endocrinology of music, the six major musical interventions, and the concept of melody/raga in Indian classical music.

“If the audience is predominantly medical students, I would explain the steps of randomized controlled trial and the sources of research funding. This is followed by a Saraswati Veena recital/demonstrating the emotions evoked by ragas. There is a Q&A at the end of each session.”

The doctor has named her series ‘Oncology and Strings‘.

But, it was only when she returned to India, did Dr Rajendran realise there is a “sharp distinction between music and music therapy interventions”.

“According to the American Music Therapy Association (AMTA), music therapy is the clinical and evidence-based use of music interventions to accomplish individualised goals within a therapeutic relationship by a credentialed professional, who has completed an approved music therapy program. India has two substantial voids — first one is the lack of evidence-based music interventions. Blinded randomized controlled trials among a large cohort of patients conducted in phases are the gold standard of scientific studies as they have limited bias.

“The existing approved musical interventions are neither the studies performed on a large number of Indian patients, nor the interventions are the music tailored to Indian population. The second challenge is that the National Medical Council (NMC) has not assigned a physician-physician musician-musician fraternity to design an academic music therapy training curriculum and board certification guidelines,” she explained.

The doctor shared she “confronted severe physician-burnout” during her final year of medical school “as I rotated through labor room-obstetrics and gynecology, and playing the Veena for a few minutes every day was cathartic”. “While I was rotating at Harvard, Stanford and Cornell, I walked into hospital receptions at 7 am and there was soothing live cello music. I left the hospital at 8 pm with the piano playing in the corridor. I lamented that India has a vast repertoire of indigenous music, yet we have neither explored its potential academically and clinically, nor ingrained it into our health care infrastructure.” 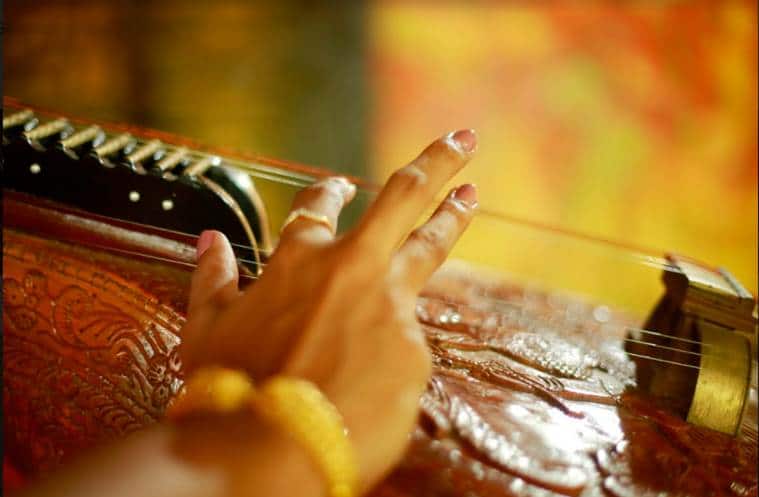 When she started playing the Saraswati Veena, Rajendran was taken by the sound that is created “when you pluck the second string (anusarani) followed by the first (sarani)”.

While the US recently celebrated 60 years of introducing music therapy into their academic curriculum, despite having two indigenous classical music traditions — Hindustani and Carnatic — “which are among the world’s most ancient music forms, India is nowhere near this”.

“Besides classical music, India houses a plethora of musical genres: folk, cinema playback tracks, independent albums, cultural and religious music, and hundreds of musical instruments. In a day, around a thousand cancer patients visit a regional cancer center; imagine if we play therapeutic music therapy, live or recorded, how many patients and families in a year will have the impact? Annually, we also have thousands of young skilled classical music students graduating from prestigious universities. If we could use their prowess — either for passive live music sessions in the hospitals (therapeutic music therapy) or for clinical music therapy after their board certification from NMC-accredited training programs,” she suggested.

The doctor — who herself listens to Raga Brindavani, Megh Malhar, Hameer Kalyani, Nattai, Saraswati, Hamsanadam, and Shudh Sarang, and is also “bewitched by the ingenuity of Chopin C minor Nocturne and Mozart’s Moonlight sonata” — went on to say that burnout is toxic for patients and physicians because “it is related to loss of empathy and increased medical errors”. “Several students put their artistic skills on the back-burner to focus on medical training. A few oncologists I know have started taking music lessons in their 40s to cope with the stress. Getting back to the creative outlets is imperative.”

But is there concrete evidence that classical music/any other genre of music can help heal patients?

“There is heterogeneity in the research methods of randomized controlled trials conducted worldwide over the years; all of them conclude music therapy reduces anxiety and stress in patients. Music has a significant positive impact on memory and orientation among Alzheimer’s patients. Music may improve social interaction and verbal communication among autism spectrum disorders. It was found to help reduce mood disturbance among autologous stem cell transplant patients. There have been researches that showed music was effective in reducing preoperative anxiety in cancer surgeries. Some studies conclude music has been effectively used for gait improvement and symptom alleviation in Parkinson’s disease,” Rajendran concluded.